Authentic playing feeling and excellent piano sound are the main features of the new Kawai CN34 digital piano. The new RH2 action with Ivory Touch, Let-Off simulation and a 3 sensor system as well as a sound source with maximum 256 notes polyphony and the new effect system are just a few of all new features. In addition a selection of useful functions is on board. The Lesson function supports you while learning the most popular practising songs of the Alfred piano books.
You may also enjoy the possibility of the Dual- or Split-mode and use the additional sound selection. Recording and playback using the MIDI and Audio jacks connected to a computer or direct recording/playback using a USB memory with MP3 or WAV format is possible.

Thanks to the experience of making acoustic pianos for more than 85 years Kawai reached a very high reputation among piano teachers and pianists. Like all other Kawai instruments the new CN series is made based on extremely high standards ensuring a long time of joy playing this piano.

The new CN Series’ class-leading Responsive Hammer II keyboard action recreates the supreme touch of an acoustic grand piano, with its realistic movement and rigid, springless design providing a smooth and natural piano playing experience. The instruments’ modern, triple-sensor key detection system enhances responsiveness and accuracy, with structural reinforcements throughout the action assembly helping to minimise horizontal key wobble during staccato and fortissimo passages. The weight of the keyboard is appropriately graded to mirror the heavier bass hammers and lighter treble hammers of an acoustic piano, while let-off simulation recreates the subtle ‘notch’ sensation felt when softly playing the keys of a grand piano. These important characteristics allow discerning pianists to practise their expanding repertoire with confidence, and ensure that there are no unpleasant surprises when called upon to perform using the finest acoustic grand pianos.

The impressive CN Series features Kawai’s highly regarded Ivory Touch key surfaces as standard. This finely textured material gently absorbs fingertip perspiration and oils to assist playing control, and possesses a natural, matte finish that is smooth but not slippery. Furthermore, this moisture is absorbed without dirt or grease permeating the surface, allowing the keytops to be wiped clean easily using just a damp cloth. 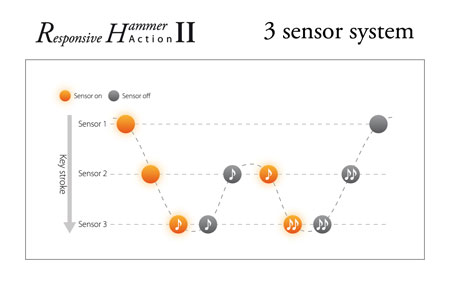 Complementing the grand piano-like keyboard touch, the Responsive Hammer II action also features a new triple-sensor key detection system for enhanced playing realism. The third sensor improves responsiveness when playing the same key repeatedly, and also allows the sound of a single note to be gradually ‘layered’ without the previous tone being lost. In addition, improvements to the CN Series’ sound hardware also permit the speed at which keys are lifted to influence the release character of piano sounds, providing a greater range of expressive detail between staccato and legato playing.

The beautiful sound of the Kawai EX concert grand piano is at the heart of the new CN Series, with all eighty-eight keys of this world-class instrument painstakingly recorded, meticulously analysed, and accurately reproduced as high-fidelity digital waveforms. Recording each key individually in this way – as opposed to stretching the same tone over several different notes – preserves the rich harmonic character of the EX concert grand piano, and guarantees that the sound heard when playing any one of the CN Series’ keys is a faithful representation of the original acoustic source.

When playing a fine piano, the amount of pressure applied to the keyboard affects not only the volume of the sound produced, but also the unique tonal character of each note. Therefore, in order to construct a realistic acoustic portrait of the EX concert grand piano, not only is each key recorded individually, but also at various different volume levels, ranging from gentle pianissimo to thunderous fortissimo. The new CN Series offer a highly detailed acoustic portrait, employing Kawai’s unique Progressive Harmonic Imaging sampling technology to ensure smooth tonal transitions across the keyboard and throughout the entire dynamic range.

An experienced piano technician is essential to fully realise the potential of a fine acoustic piano. In addition to meticulously tuning each individual note, the technician also performs numerous regulation and voicing adjustments that allow an instrument to truly sing. The CN Series’ Virtual Technician functions simulate these refinements digitally, allowing performers to shape various aspects of the piano’s character to suit their unique personal preferences.

The CN Series’ powerful new digital effects engine further enhances the instrument’s superior core sounds, applying additional layers of detail and realism that bring performances to life. The CN34’s studio quality chorus, tremolo, delay, and auto-pan effects can be used to tailor a sound’s character and feeling, with additional amplifier/speaker simulation applying vintage warmth to electric pianos. The depth of a performance can then be transformed using the instrument’s updated reverb features, allowing pianists to position themselves within one of six acoustic environments, ranging from a small practise room to an inspirational grand cathedral.

THE VARIETY OF A DIGITAL PIANO

The new CN Series models feature song recorder capabilities that both enhance one’s playing enjoyment and can also assist piano study. The CN34 recorder has a expanded functionality with 2-track recording, allowing individual left and right hand parts or two different voices to be recorded separately, then later played back together. In addition, this model also includes a USB to Device connector which allows songs and settings stored in internal memory to be saved to USB flash memory, or for data prepared on one instrument to be loaded onto another – an invaluable tool for busy school music labs.

With an impressive selection of GM2 instrument sounds and drum kits, and 256 note polyphony, the CN34 is capable of playing and recording multi-track SMF (Standard MIDI Format) files from USB with stunning realism and musicality. USB devices can also be used to play back MP3 or WAV audio files, allowing musicians to accompany their favourite artists, play along to professional ‘minus one’ backing tracks, or simply learn the chords for a new piece. It’s even possible to record and save performances directly as MP3/WAV audio files for emailing to family and friends, or casual listening away from the piano.

Reinforcing the CN Series’ reputation as the most realistic digital pianos in their price range is Kawai’s Grand Feel Pedal System. This new development accurately replicates the individual weighting of the damper, soft, and sostenuto pedals of a Kawai EX Concert grand piano to further enhance acoustic piano authenticity.

The new CN Series utilise modern, energy efficient components that reduce electricity consumption by approximately 50% (compared to previous models), while the instruments’ optional power saving feature can also turn off the piano automatically after a specified period of inactivity.