Three special functions further enhance the CA Series' incredibly realistic piano sound. String Resonance causes held notes to resonate in "sympathy" with the other held notes' upper harmonics. Damper Resonance occurs when the damper pedal is depressed, causing notes that are sympathetic with one another to resonate, as well as notes that are adjacent to one another. Finally, there is the Note Release effect which re-creates the sound of bass hammers returning to their strings after a rapid note release.

Continuing the advancements of its multi-award winning predecessor, the KAWAI AWA Grand PRO II, 88 wooden-key action, closely reproduces characteristics of the acclaimed EX Concert Grand Piano. Its graduated action, with decreasing weight from bass to treble, offers the dynamic feeling of an EX grand, and is widely regarded as one of the best digital piano actions in the world. 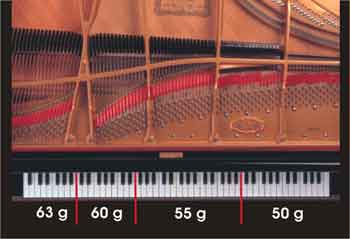 A piano technician plays a very important role for an acoustic piano to be in the best playing condition for a pianist. Our VIRTUAL TECHNICIAN function does the same work digitally. You'll find Kawai's exclusive Virtual Voicing, capable of digitally "voicing" the piano sound. There are also controls for adjusting the action's Touch, String and Damper Resonance, as well as several other piano-specific settings.

When you layer two sounds (Dual) or use different sounds on the left and right (Split), the balance slider is convenient for quick and easy adjustment of the two sounds' balance. Moreover, the CA51 lets you adjust the octave range of the second sound (Layer Octave Shift, Lower Octave Shift) in DUAL and also in SPLIT mode. Also you can set up the dynamic behaviour of the second DUAL sound (Layer Dynamics), to let you avoid having too high a volume on it. In Four Hand Mode you can split the keyboard in two halfs by having the same octave range on both parts. So two pianists (i.e. teacher and pupil) can play and practise together on only one instrument.

For the aspiring pianist, Kawai has provided a recorded collection of standard practice and warm-up drills, including major and minor scales, arpeggios and Hanon exercises. A music book containing all the drills is included with your instrument. And for the beginner, we've included typical first-year lesson songs from Czerny, Burgmüller, Beyer and Bach. You can play along with any of the pre-recorded songs and drills, adjust the tempo, mute either hand and even compare your recorded performance to the built-in professional performance.

In addition to the standard metronome click you can choose from 100 drum rhythms for your convenience on all three new CA models. Play along with a complete drum set. You can load various rhythms and change their tempo. Never before was practising so much fun.
Sound examples
-
Update Required To play the media you will need to either update your browser to a recent version or update your Flash plugin.
Documents
-
Specifications
-